Hello! Happy Tuesday to everyone! I have a super cute card to share that I made using a bunch of Mama Elephant products. Some older and some newer, so let's get started! 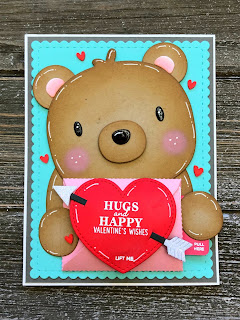 I knew that I wanted the bear to be presenting a sweet valentine that incorporated the Flip Slider Die Set. To create the valentine, I used the Pocket Envie Creative Cuts Set and decorated it with the Favor Bag Accessory Love Creative Cuts Set. I then heat embossed a sentiment from the I Like You stamp set. So the recipient would know that the card is interactive, I used two sentiments from the Heffy Doodle Interactively Yours Stamp Set on the heart flap and the pull tab for the flip slider. To keep the pink envelope closed, I used a small adhesive magnet closure. 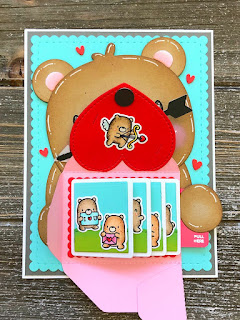 The little bear is presenting a love story on the flip slider section. I used the new Little Bear Agenda Stamp and Die Sets. I colored them with Copic markers and adhered them to the little scene panels included in the Flip Slider Creative Cuts set. As you pull the tab on the right side of the card, the little bear's paw puts the flip slider into action. How adorable is that?! Below are several more photos of the slider panels that are revealed as you pull: 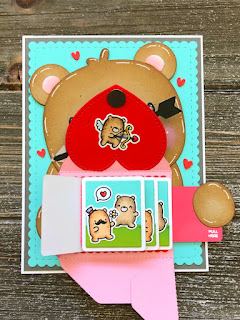 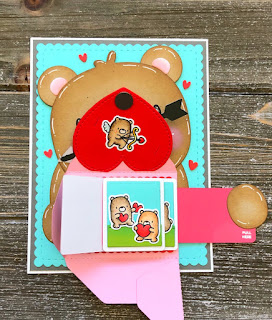 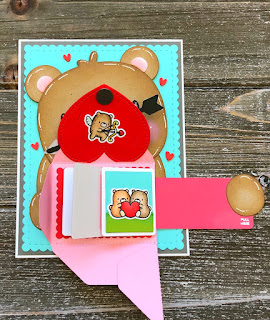 I die cut a piece of aqua cardstock using the scalloped stitched rectangle from the All Prettied Up Creative Cuts set and mounted it onto a piece of grey cardstock. I then mounted those onto a slightly larger piece of white cardstock to set the main design off.

I had so much fun creating this card! I also want to try this using the other little agenda sets and the some of the other Favor Bag Accessory add on sets. Thank you so much for stopping by and I hope that you have a great day! 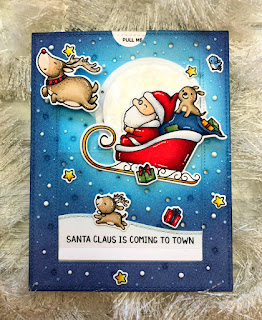 Megan
Hi! My name is Megan and I live in the Blue Ridge Mountains with my family. I enjoy reading, sewing, but most of all, making cards! (If I'm not making a card, I'm thinking about making a card! Haha!) My favorite card designs involve creating scenes and anything with cute critters. I love using Copic Markers for my projects, but I also enjoy colored pencils and watercoloring. Thank you for stopping by! I hope that you enjoy my creations and that they inspire you!